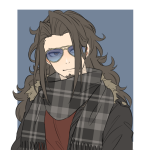 Jay - Kamina from Gurren Lagann. I know, a little lame but I took huge inspiration from the whole grandstanding confidence thing.

In Topic: A Darkness Will Swallow You Whole

Skye took the scrolls, giving each a read over. She stayed mostly silent throughout, maybe the odd hum of understanding.

She gently took the watch from Inari, smiling gently towards the fox sage "No need to be so tense darling, we're all friends here." The Embodiment finally broke her silence, stepping forward and gently patting Inari on the head.

"A problem of Asura's is a problem of mine, no matter how big or small. I don't know who is stealing from her, nor do I have any leads but I would like to help. Could you take me to her? Try as I might, I don't have the power to drop into the Records of Time like you and yours can." She smiled, examining the watch "Is this just a gift or is there some meaning to it by the way? It is most beautiful"

"I'm not here to say no" Jesse smiled, the bubble of hex finally lowering- After all he liked this coffee shop.

He opened the door for the woman before him, gesturing for her to enter with a wink "I'll repay ya with a bit of company if you've got the time, been bored as hell all day"

If she entered the shop, the embodiment would have followed her. It was a nice little local run store, the sort that would-be writers and artists flock to as it's the only non-chain within a five mile radius. "Tell ya what, there's a little nook that I'm a huge fan of in here, big comfy seats." The would-be embodiment looked around, fixing his eyes on a seat in the corner. As luck would have it, the couple sat there were just leaving.

In Topic: Unpick the Thread

The Templar stirred, his eyes opening to Kaleb's light slapping. "Why in the hell...?" He uttered, still half asleep as he looked over his friend.

He tried to stand, using his staff to stabilize himself- Was he really this weak now?

The answer, of course, was yes. Even though he had the opportunity to recharge his power at the Outerverse that was only a small amount of Positive energy- He was rough and out of practice. Even the use of his staff as a focus only granted him access to his normal power and not necesarrily the energy to perform his usual feats of Temporal skill.

Jay coughed, gazing over his friend. Why was he dressed so weirdly?

The Templar looked around him, the temporal energies making up this illusion being fairly clear to him. He'd need to find the hole he made, but first....

"Kaleb, buddy! It's been a while!" He took on his usual overly confident affect, stretching to try and mask his pain "How're you doin'?"

In Topic: Television, the best Teacher

"They can't all be buttheads. Maybe they've just not seen how fun magic can be?" Freya mused, watching Cameron's progress with character creation- She was a level 60 Alchemist herself.

SCOUT scuttled around the room, seemingly perplexed by whatever Rev was getting up to- Watching him intently.