A Darkness Will Swallow You Whole

13 replies to this topic

Black, undying emptiness, the kind that you either love or hate, was all that awaited any visitor to this particular space in the Saeculum Galaxy. Nested some distance away from any solar system, there was nothing remarkable about this place. The light of some stars reached this place, having traveled lightyears to get here, illusions of a past, like whispers from yesterday. Yesterday. That's what they were here to protect, come hell or high water.

Silver permeated the blackness of space, swirling silver, as a round portal opened up here. From the portal, a bubble emerged, still half-connected to the orifice in order to form a safe seal for whoever might come through next. For a moment, nobody did. Then, after some brief pause, the kitsune sage would emerge, and with her a golden haired boy being dragged behind.

The bubble provided some atmosphere for the two to breathe in, some semblance of gravity to orient themselves, and some lack of vacuum to allow for communication. Nek's face changed from somewhat startled, no doubt from the sudden departure Inari had forced upon him, to a look of pure terror, for some inexplicable reason. He looked over to his kitsune companion with some great amount of concern in his eyes.

Not too far away, Nek thought, he could sense some terribly dark power, something sinister lurking in the shadows. But where? They were in the vacuum of space, at a location Nek had chosen at random in hopes of communicating with Lady Skye. A few moments later, the sinister darkness seemed to fade away, and Nek's face relaxed a little. "Some passing ship somewhere? Or maybe I imagined it..."

He looked down at his hand, still en-grasped in Inari's. "You can let go now!"

"Huh?" Inari looked at Nek, her eyes wide as she had also sensed the feeling Nek had, at least for a moment. Her attention seemed to be more on that then what he had said. "Oh! Sorry!" She quickly let go of his wrist and floated there turning her head to the right, then to the left, and then back to back as if trying to pinpoint what they had felt.

"I don't see any ship or sense any thing else." She replied to Nek's other question. "Should we choose a different place?"

Just as Inari asked the question, the vacuum around them started to grow colder as if the temperature had just dropped ... even more than it already was being that they were in the middle of space.

With the temperature drop came the faint almost unheard sounds like that of someone screaming from far behind them. But the 'sound' of the screaming was more of an echo than a current scream as it held a eerie tone to it. 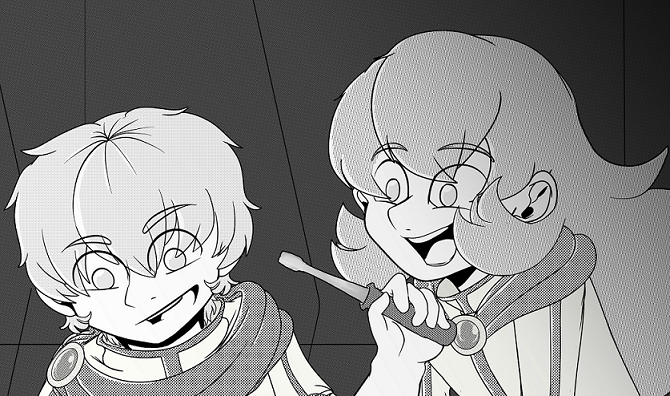 As the sound of screaming echoed around them, Nek looked all around as well, trying to track down the source of the scream. His face once more grew with alarm.

His mind began to work more rationally. "They screamed. Sound doesn't travel in a vacuum, that's why we're in this oxygen bubble. Unless... Magic?"

He began to search the area for any strange magic signatures.

Something from the distance could be seen floating toward them. At first it looked like mini asteroids, numerous in number, but smaller than normal. As the things came closer however, it could be seen that the objects were parts of people. Severed limbs, organs, heads... all frozen in ice. If one were to look closer at some of the heads they'd see feline-like ears on them, and iced wings also floating towards them.

The screaming started to grow louder.

"I-I.. think we found the source." Inari stuttered, her eyes as wide as the moon as she frantically looked around at all that was coming towards them and floating around them. She held her hands up to her fox ears as she tried to block out the sound. Her  expression looking somewhat sickened. It was all she could do to not puke her guts out right there in space.

"I thought there was something strange going on" A calming voice rang through space as the floating mass of gore seemed to stop moving entirely "C'mon now little sweetie, go move on. Shoo"

Almost on command the mass found itself moving away from Inari and Nek, being forcibly pushed away by an unseen force. The inky blackness of space began to morph, slowly forming into the mass of a woman. The darkness pulled itself back into a dress, seemingly made of space itself, revealing the Embodiment of Space - Skye.

"Isn't this cute, Templars in my neck of the woods. You're lucky you know, if your weird time portal wasn't left open I wouldn't have spotted you." She smiled, arms folded. There was a certain warmness about her demeanor, as though she was talking to lost kids "You probably shouldn't be wandering the skies, the world out here is very different to the ones you're used to walking."

Nek took a moment to regain his composure at the sight of the... sickening patch of space. He turned to Skye, not oblivious of her beauty, but also distracted by the terror that had just filled his person.

"Such things live in your domain?" he asked. "We are not here on a social trip. We were looking for you."

His expression was grave as he reached into his pocket and pulled out the scrolls.

"W-wwhat Nek said." Inari could barely stutter as she looked like she had just seen hell. Which, was odd if you thought about it because she actually HAD seen hell before. Just not the terrible bits. She had spectated the Plex tournament a bit, but had tried to stay away from any of the more torturous regions.

Inari produced the pocket watch that she had wrapped around her wrist. "Master Jay told us to come here as a task from Lady Asura."

"Everything lives in my domain, good and bad. You've been looking for me? You little sweeties" Skye smiled, leaning in to inspect the watch. She sneered a little at the mention of Jays name, that man had a way of rubbing her the wrong way.
"What does my dear big sister wish of me and why did she send her pets instead of coming to see me herself?"

"There's grave dangers taking place, Your Grace," Nek replied, extending his arms towards the embodiment and presenting Halsey's scrolls. "I know not the contents of these scrolls. Only, that they pertain to a potential thief among the embodiments. Or worse, perhaps a threat such as Plex, capable of causing offense against the embodiments themselves..."

Nek's hands slightly trembled. To tell the truth, he could not stand this woman. However; he tried his best to mask his emotions and complete Jay's orders.

"I-it was something about an important issue," Inari held out the watch for her to take. "I think.... missing books?" She squeaked, ears back. Inari didn't dislike Skye as the others, as she hadn't really met her as many times. But it didn't make meeting any Embodiment less intimidating for her. Usually she had Jay with her, or in the past Hikaru had dragged her along when meeting with important figures. But for just her and Nek? Skye could easily throw the two in a black hole, even more so than a normal mage, if she wanted to. Or worse. Turn them into black holes. Or food for whatever that thing had been...

Just the thought of such things made the hair on Inari's ears and tails stand on end as she shuddered.

Skye took the scrolls, giving each a read over. She stayed mostly silent throughout, maybe the odd hum of understanding.

She gently took the watch from Inari, smiling gently towards the fox sage "No need to be so tense darling, we're all friends here." The Embodiment finally broke her silence, stepping forward and gently patting Inari on the head.

"A problem of Asura's is a problem of mine, no matter how big or small. I don't know who is stealing from her, nor do I have any leads but I would like to help. Could you take me to her? Try as I might, I don't have the power to drop into the Records of Time like you and yours can." She smiled, examining the watch "Is this just a gift or is there some meaning to it by the way? It is most beautiful"

"Wait, really?" Nek asked, astonished that Skye was actually asking to help. To be fair, most of what he knew about Skye, was what he had heard from Lady Asura. "Okay... But I don't think Lady Asura is in her domain right now."

He closed his eyes, concentrating. Time was like a river, and he was standing in it, or rather, floating in it. Most people were simply caught up in that river, forced to go with the flow. Nek, however, was a Templar, and thus in many ways an extension of the river itself. He tried to feel where the current of time was the strongest, upstream so to speak. After a few moments, he seemed to find what he was looking for, because he opened a portal of swirling temporal energies.

"Shall we?" he asked. Not waiting for an answer, he hopped through the portal.

"M-master Jay said Lady Asura said it was for protection. Th-that's all he said." Inari squeaked in reply once more, the fur on her tail and ears standing even more on end than before at Skye's touch despite the Embodiment saying that they were friends. She was clearly very intimidated and almost jumped in relief when Nek opened the portal.

"WAIT FOR ME!!!" The Kitsune Sage ran behind Nek so fast that she was an orange and green blur.

Skye swallowed her pride and followed in after, temporal portals were a crude way to traverse distance and left a bad taste in her mouth every time.

Back to Saeculum Galaxy